Improvements have been more subtle but still seeing progress.

With N placebo and mind over matter is a huge contributor so it's nearly impossible to say how much has to do with her positive attitude changes and how much is mineral related. Perhaps there is a lot of attitude and some extra boost with the minerals.

In any case, she continues to appear stronger. She has done some longer unassisted standing from sitting position. She is also doing more long sitting (when prompted to make a conscious effort).

Placebo for E is unlikely. He doesn't understand what the minerals are for and probably doesn't even realize he is taking them. He too seems much stronger. What I am noticing is he is CHOOSING to sit up and with his feet in front of him (somewhere between long sitting and tailor-sitting) a whole lot. This has never been his preferred position, more so on his knees or 'w' sit. It has been pretty cool to watch.

His heal cords and hamstrings don't necessarily seem any looser, which is a bummer. He has not regressed but progress hasn't continued to the point where N's was when hers released, yet. He seems like he may have just had a growth spurt, if so, that would explain it, but I haven't had time or energy to keep track with measurements.(and we are both currently sick)

We will keep moving forward, soon to be adding whole body vibration therapy, and will consider possibly increasing his daily trace mineral intake to 15ml 2x/daily.

Whole body vibration and cerebral palsy: a systematic review
Posted by Michelle at 8:09 AM No comments:

E has been getting super tired every day in the late afternoon for the past several days (since at least day 27). He has not been taking nap for quite some time now but is now, and he puts himself there. He gets extremely tired and cries hysterically until we can agree to lay him down in my bed with his favorite nap time setup. Because it is so close to dinner and his typical bedtime, we wake him for dinner and expect he will stay up a little later than normal but no, he wants to go back to sleep. We are assuming he must be getting ready for a growth spurt. Normally this is a fine thing, with CP slow and steady is much preferred.

Aside for being exhausted in the late afternoon, he is clearly showing increased strength in his core. He also does equine therapy once a week so I don't want to discount that but definitely seeing some, almost sudden, improvement that makes think, "wow!" Like he crawls up on our counter high barstools (with backs)...which is not new, but then proceeds to not only climb onto the counter but does so sitting perched, up right, on the edge with his feet dangling over the side. He sits up there like it's no big deal but my brain has not yet caught up to the fact that he really can do this and so it blows my mind every time I find him sitting up there. Crazy!

Today he also sat at the edge of the bed, which isn't totally new but just so straight and sturdy AND he used his stomach muscles to get into sitting position from his back instead of rolling over and using his arms and legs. Pretty impressive and a definite improvement.


Today when I helped N stand up out of her wheelchair to move to her walker I was amazed by her strength. Usually she needs a lot of my strength to help her to standing but not today. I used one hand and very little effort. I know this isn't really very solid scientific evidence of progress but these is my parent observations which is cause for excitement over here.

Getting stronger every day!
Posted by Michelle at 7:42 PM No comments:

What is PGP & Which Minerals?


The trace minerals we have been using are now available on Amazon (they weren't a few years ago when N was on them previously) PDCM 72+. Others may work just as well, this is just what was used in the project and since we had such success with them I see no reason to try anything different. PDCM 72+ Trace Colloidal Minerals on Amazon I have nothing to do with this company and have no particular inside knowledge on the safety of these minerals versus others, I only know what has worked for us.
Posted by Michelle at 6:49 PM No comments:

He has such tight hamstrings and has such bad habits in the walker that we hadn't yet seen him walking with his heels down but tonight we did!


Compare to just a few weeks ago before we started minerals.

Posted by Michelle at 4:35 PM No comments:

Not sure if I will have the time and energy to keep up on this blog but having been off the minerals for a loooong time we are going to give them another try.

2 years ago we added another child to our family who also has CP. E is now 5. 3 weeks ago we started him on the minerals and like N his heal cords are clearly releasing! This brought me back to this blog where I was reminded of the incredible progress N had on the minerals both times. Unfortunately she now is beyond released at the heal cords (happens with surgery too so likely would have happened whether released by surgery or minerals) and with her growing like mad (she is 12 now), which means growing faster than her hamstrings can keep up with AND heavier on her ankles, she really needs her ground reaction DAFOs to be at a 90 degree angle to even give her the possibility of standing up straight, however, that is not currently what she has. Both N and E are scheduled for SDR (Selective Dorsal Rhizotomy) surgery this summer. Now we prepare for great success!

So here we go. (I will try to track both kids on this blog) 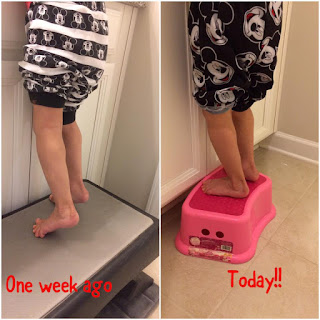 Here are recent videos of the kids, originally taken for the purpose of having pre SDR surgery levels.

(the dates are wrong on the videos, was actually March 19th but doesn't really matter)

Can you believe it?! She gave us 6 steps today!!!! AND we got it on video! The first video shows her taking 4 steps tonight and the second is where she pulled out SIX!! So cool!!
Posted by Michelle at 4:46 PM No comments:

Let me back up for just one moment.

"And we have 4 independent steps again!! No straps repositioning legs this time. The steps are not very controlled but 4 steps is still a nice starting place!! WTG Peanut!"

I was/am impressed and really surprised. I am excited to see where she will go from here.


Here are some videos of her using the walker today. She really has built up a lot of strength but as you can see in the videos she is still crouching (some due to lack of strength and some due to tightness in her hamstrings, I'm sure) but over all I think she is doing well and look forward to using these videos to look back at later as we continue to track her progress.

Most importantly, she is beginning to see herself as a walker and is working hard to get better. She also will go for the walker rather than crawling, that's important.

Posted by Michelle at 6:35 PM No comments: